A Brief History of St Mary’s

The land on which the church and vicarage stands was part of 150 acres purchased from the Canterbury Association by the Reverend George Robert Poulson of Addington, London. Poulson never came out to New Zealand and in 1860 Henry Sewell, Deputy Chairman of the Canterbury Association, acquired the land. He gifted 5 acres to the Diocese of Christchurch for a church, parsonage and glebe in 1863.

An orphanage to accommodate 60 children was erected on a portion of the land in 1864, and church services were held in the schoolroom by the Reverend Edward Atherton Lingard. Lingard was assistant master at Christ’s College and deacon assistant at Christchurch St. Michael’s. At this stage, Addington was part of the parish of St. Michael and All Angels and remained so until 1900.

A church room was built on the site marked out as Addington Square to a design by Speechly and Chrisp, architects. It was opened in February 1867 and regular Sunday worship began using clergy from St. Michael’s.

In 1870 it was decided that this building should be the nucleus of a new church. It was given the name of Saint Mary the Virgin reputedly at the request of Henry Sewell. Gifts were made by various people and a lectern, prayer desk, chalice and paten, and harmonium were installed. A new porch and doorway was added to the west end of the building. Three stained glass windows were installed in the sanctuary in 1875. Herbert East (1875-92) was the first resident priest, living in the orphanage until the vicarage, designed by J.C. Maddison, was completed in 1878.

With the help of the architect, B.J. Mountfort, the church was extended westwards in 1880 to double its size. The south aisle was added to the church in 1893, increasing the seating capacity to 300. The north aisle was built in 1900 to a design by the Augustus Schwartz, Inspector of Public Works for Canterbury, who was also the People’s Warden for the parish. 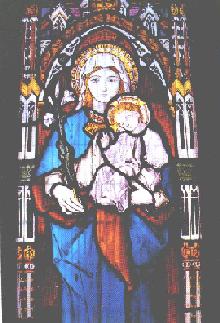 Major repairs were carried out on the ageing church in 1935-36. The steeple was dismantled and a new iron roof replaced the shingles.

A new steeple was erected in 1961. The outside of church was stuccoed in 1960 and the vicarage stuccoed in 1962. The interior of the church was completely re-ordered in 1963 at the instigation of the Reverend John Froud. The plan by the architect Don Donnithorne included the first freestanding altar in the Diocese.

In 1995 the sanctuary area was further enlarged to bring the altar closer to the worshipping community.

The church is distinguished by the contributions of talented artists among the congregation. A reversible cross on the rood-beam depicts the suffering Christ on one side and the risen and triumphant Christ on the other. Modern liturgical banners and altar frontals adorn the church.

3. Arguments with the Bishop!

The district had its own vestry and church wardens in 1871, but was not given full parish status until 1900. At various times the parish has been associated with Halswell and Spreydon, and for a time was associated with the local Methodist Church.

For four years from 1887 there was an argument between the vestry and the Bishop over whether the endowment from the now rented orphanage could be used towards the Vicar’s stipend. The Bishop wanted the parish to stand on it’s own feet and not rely on endowments. In the end the vestry won, but only after cutting down the stipend of the Vicar while the Bishop withheld the funds!

It was hoped to repair, repaint, and consecrate the church in 1888. The vestry applied for a grant from their endowments but, “meeting no sympathy from the Bishop and being refused money belonging to the district”, both the repairs and the consecration, were postponed.

Weak finances and friction between the vestry and Bishop had undermined the life of the church. It was only after the Reverend Walter S. Bean was appointed as Vicar in June 1882 that things began to improve. (Walter Bean was Vicar for 41 years, from 1882-1933).

The church was consecrated in October 1892. The vestry and the new Bishop resolved their dispute over the use of the endowment revenue in September 1893.

However, with the lease expiring in 1898 the old orphanage was removed, and the land sold as housing sections. In 1899 the Bishop informed the vestry that no income from the sale of the land was available immediately and that they would have to raise the entire stipend for their Vicar or he would be moved to another parish!

The money was raised with a canvas among parishioners and fund-raising events. At last the parish began to stand on its own feet. The congregation flourished under the Reverend Bean’s ministry.

This is dedicated to the memory of Richard John Seddon, Premier of New Zealand for 13 years. As a young curate in Kumara, Walter Bean met and married Seddon’s eldest daughter Jeannie. The Premier was a frequent visitor to the vicarage in Addington, and often took his grandchildren for rides around Addington Square in his carriage. On one of his last visits, Seddon gave money for “some bells for ringing”. Following his death more funds were raised and a peal of eight bells was hung in the newly erected bell-tower.  Over one thousand people attended the dedication ceremony, and the plaque was unveiled by Sir Joseph Ward. 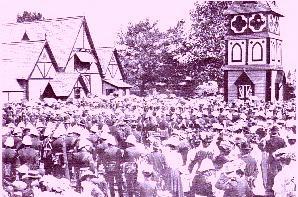 Unveiling the Plaque on the bell-tower, 22 December 1907

The lych gate was erected in 1921 in memory of those from the district who died in the first world war.

The church was surrounded by a holly hedge planted in the 1870’s. This was removed in the early 1990’s to enhance the area. The Christchurch City Council landscaped the whole of Addington Square completing the final stages of this work in 1997.

A kitchen and toilet were added to the back of the church in 1996-97, and blend perfectly with the outside structure (architect, Don Donnithorne). A low wooden wall divides off a hospitality and meeting area from the rest of the church.

A new chapter in the parish’s history took place in November 1997, when parishioners formally adopted the process of developing their own ministry and mission and became a Total Ministry (now called Local Shared Ministry) Parish within the Diocese of Christchurch.